Our last blog about the farm was mostly describing how it felt like we were working hard but not getting much done.  We always knew we were getting in over our heads with this project, but hey, we’re eternally optimistic when it comes to big picture ideas.  We knew we would feel overwhelmed, but it doesn’t make it any less fun when it happens.  But now, we officially have some progress to show, and that makes me incredibly happy and energized.

This last weekend we woke the farm back up.  The hammocks were hung, the barn doors were opened, the tools came out.  There were hikes in the woods, fishing at the pond (ok, mostly just playing in the water), endless running with Andy the dog, tractor rides, and quiet play under the trees.  We had nine kids and six adults up there planting trees, cleaning out the summer kitchen, pulling the remaining rubbish out the fields we didn’t get to last year, cooking pancakes and eating watermelon, gathering firewood, making s’mores and chilling in the shade.  The youngest little at the farm calls it “The Broken Farm” and any boards with nails in them “pokey boards”, so we have started using those terms, too.  Any kid who whined about being bored was given a task, so they soon learned to make their own fun.  I think our farm mantra will be “boredom is a choice”. 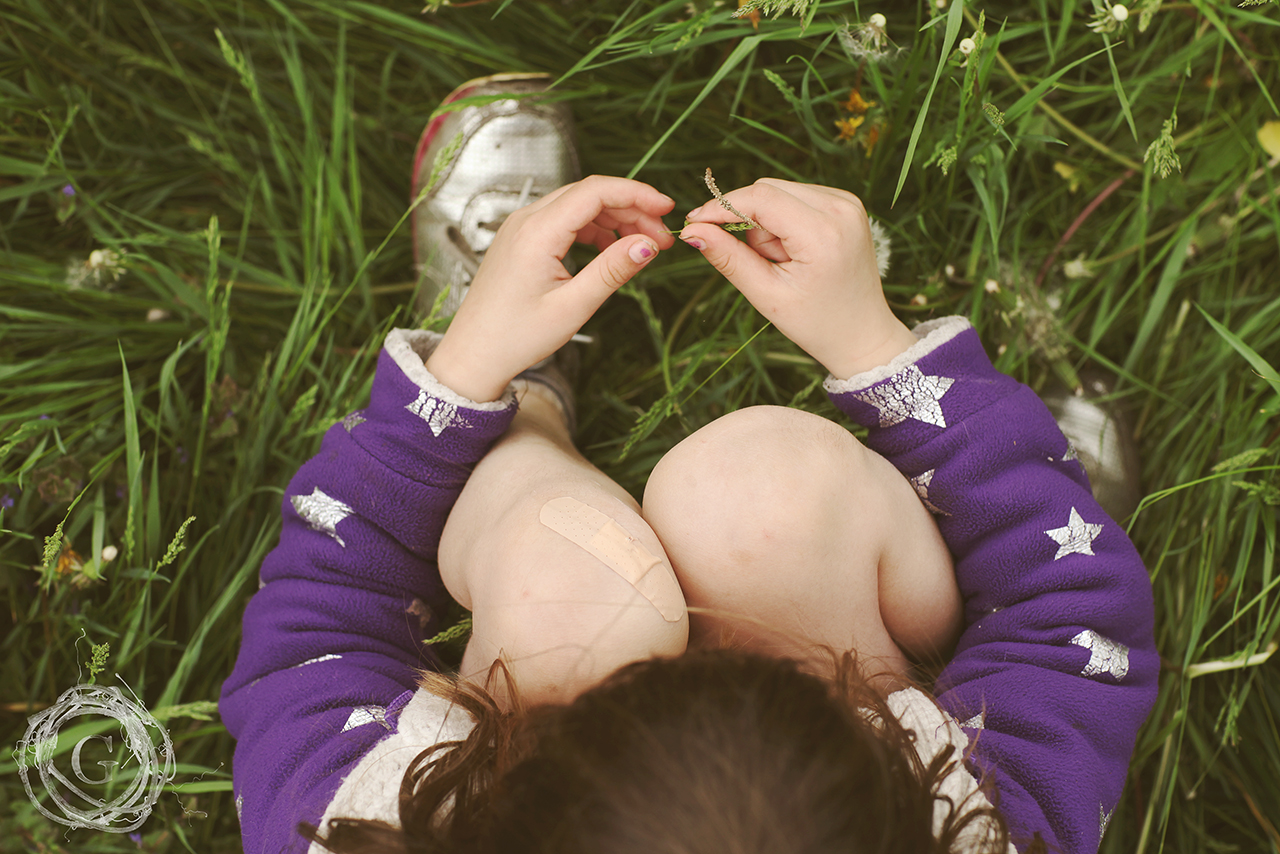 There are violets, spring iris, wild strawberry and raspberry bushes in the woods.  Our fabulous neighbors at Bossy Acres stopped by with fresh duck and chicken eggs.  We found wild asparagus and all the kids that tried it liked it!  We did learn to only eat the little ones, though, the bigger sprouts (which were a good 16″ long) were too chewy…but the little 6″ ones tasted like sugar snap peas.  Everything is green and fresh, with grass rippling in the breeze and big blue skies full of white puffy clouds. 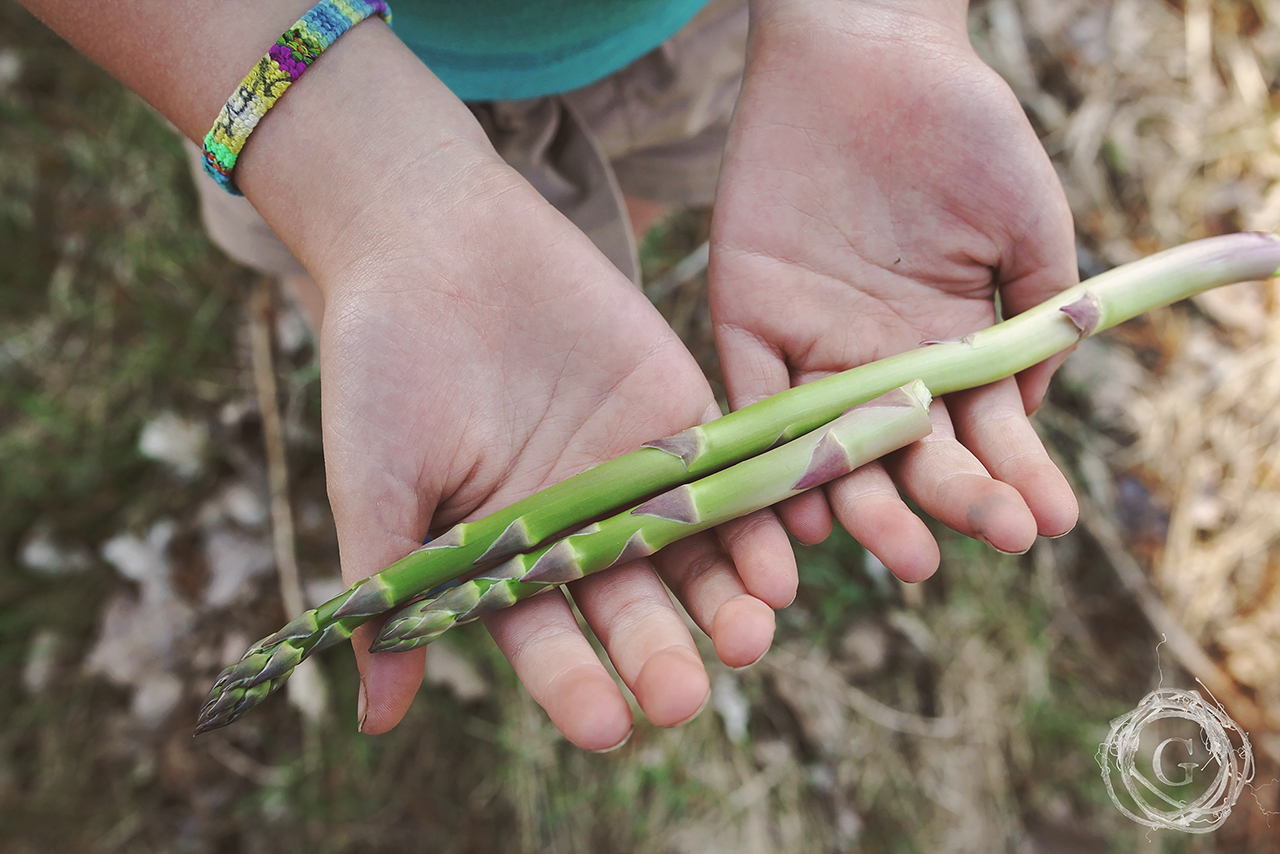 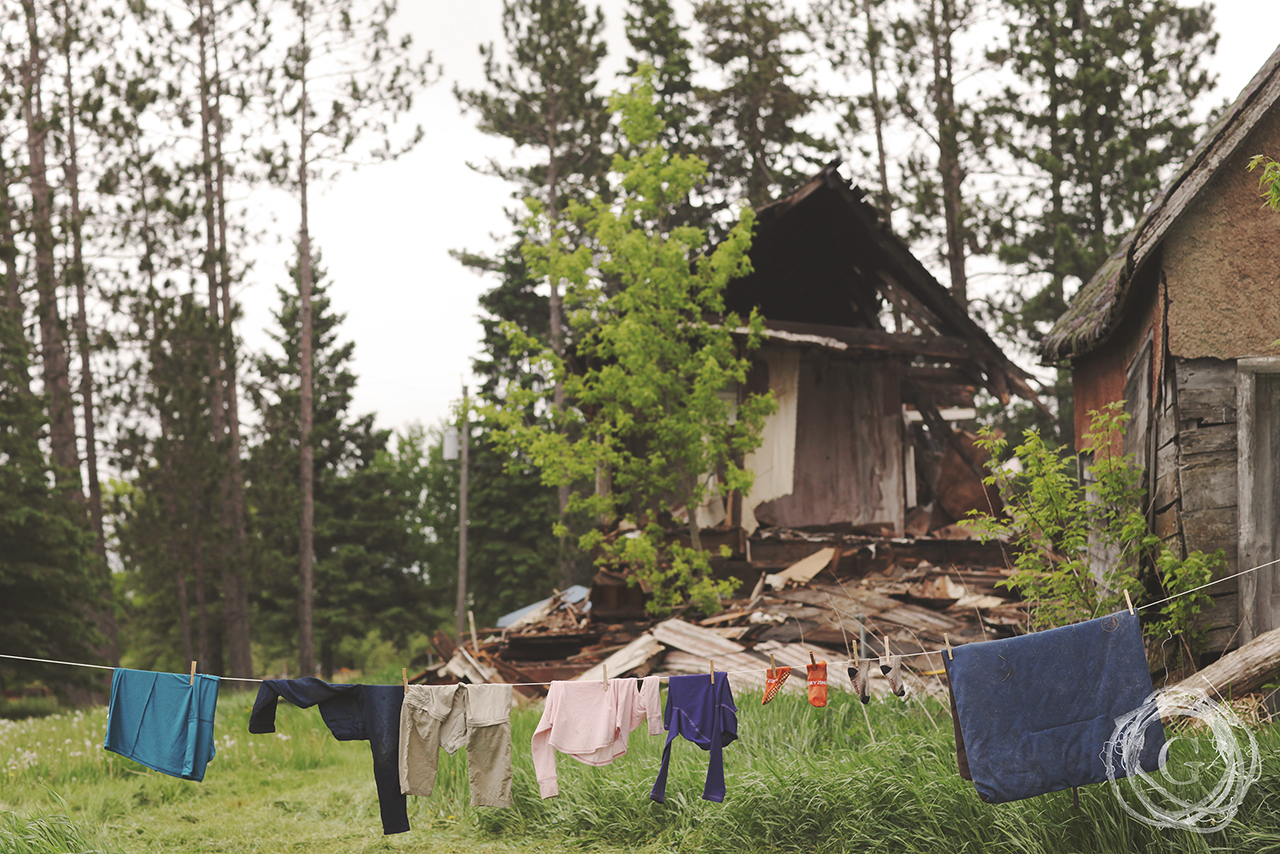 Over the winter the RV sat in our driveway, slowly getting repaired since we bought it without the fridge, heater, AC, timing belt, or generator working.  The RV is now much easier to live in when we can heat it if the nights get cold.  We walked through parts of the fields that haven’t been mowed before and cleared the rocks and logs so our 8n tractor and bush hog could mow things down and clear more spots for camping.  The front field is getting prepped for Danielle’s orchard (like she already doesn’t have enough work with her urban community garden!) and a tree house.  Reclaimed farmhouse wood has already been used (along with found nails) to build a ladder for the tree house.  A small project that teaches problem solving, resourcefulness, and basic carpentry. 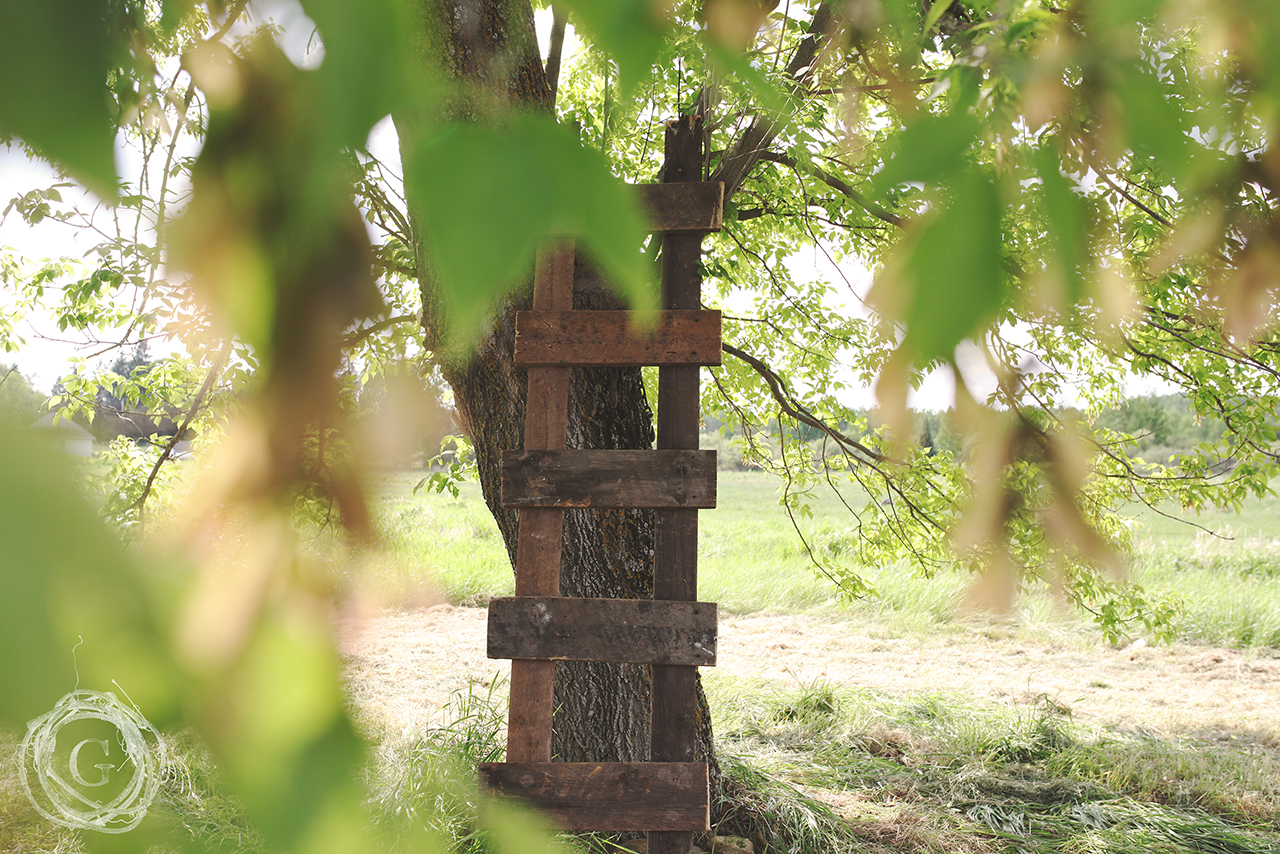 A friend who has a ton of experience tearing down old barns and homes came up to check out our barn.  Without the grass near the silo we were able to see that about half of the base wasn’t even touching the ground anymore, it had been eaten away over years of frost cycles.  So pulling the silo down is now a top priority simply for safety…but the silver lining of that project is that the concrete can then be used as the base for the driveway that we need so a concrete truck can drive through the clover field to pour the foundation for the bunkhouse.  We are determined to reuse every piece of this farm that we can!

The foundation for the bunk house was dug last fall, so it is ready for the forms, insulation and concrete.  And we’ll have a nice view of the Bossy Acres farm up on the hill.  We can’t wait to get started!  We are hoping by August we will be putting up walls, and have everything enclosed in the fall. 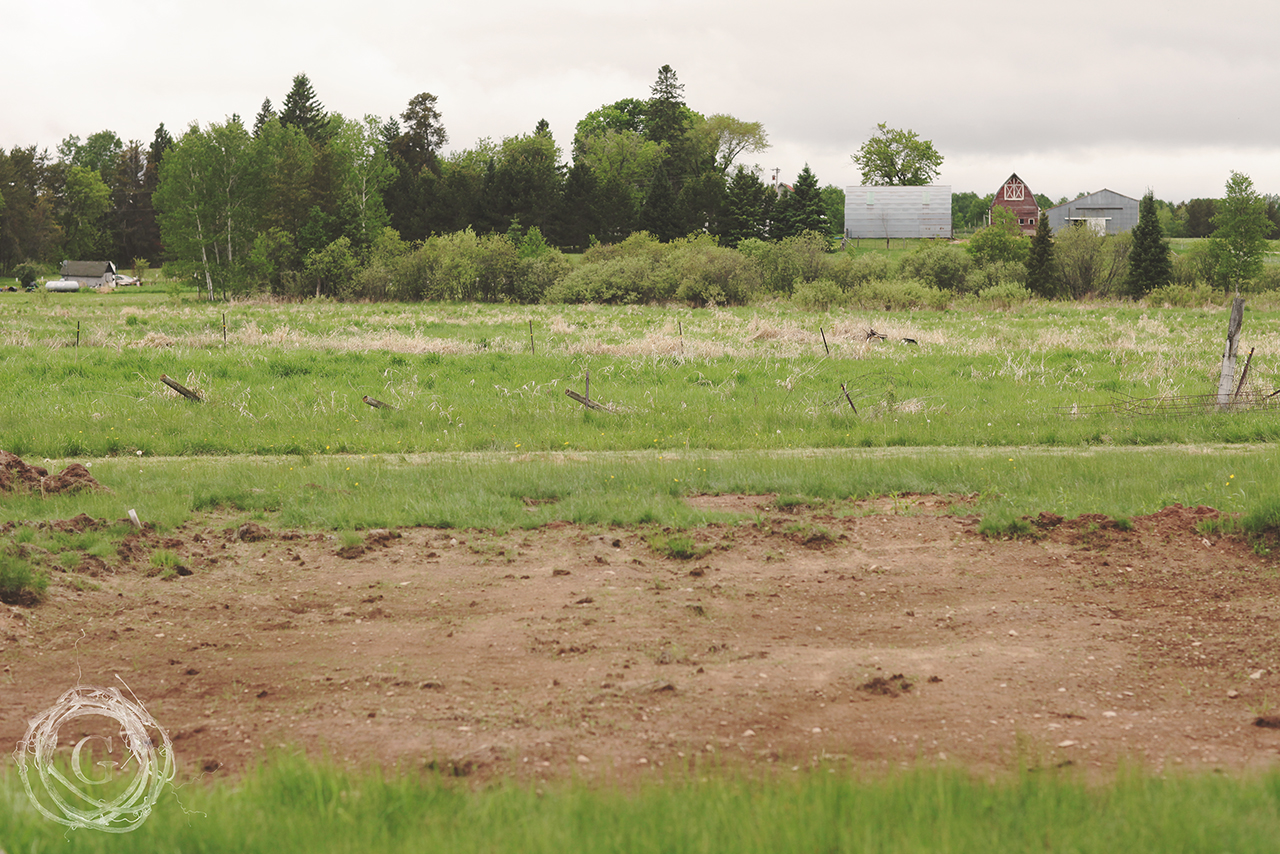 So one of my biggest frustrations is that everyone in north central Minnesota has “got a guy” that they talk about.  Not an actual business to refer, just a dude that lives in the next town.  Oh, you need a (insert any of the following: septic, driveway, tractor parts, water tester) and the response is “I’ve got a guy!”  But then that guy doesn’t know us, so there is trepidation or downright refusal to work with us.  It has been an uphill battle of trying not to be seen as “citiots” (the nickname for the idiots from the Twin Cities that come up on the weekends and are naive to life in the woods) and get to know people and prove we are invested in Bruno and want to create something awesome.  Well, we figured out how to meet the highest number of neighbors in the shortest amount of time…set a house on fire.

Here is our farmhouse demo experience over the last six months. 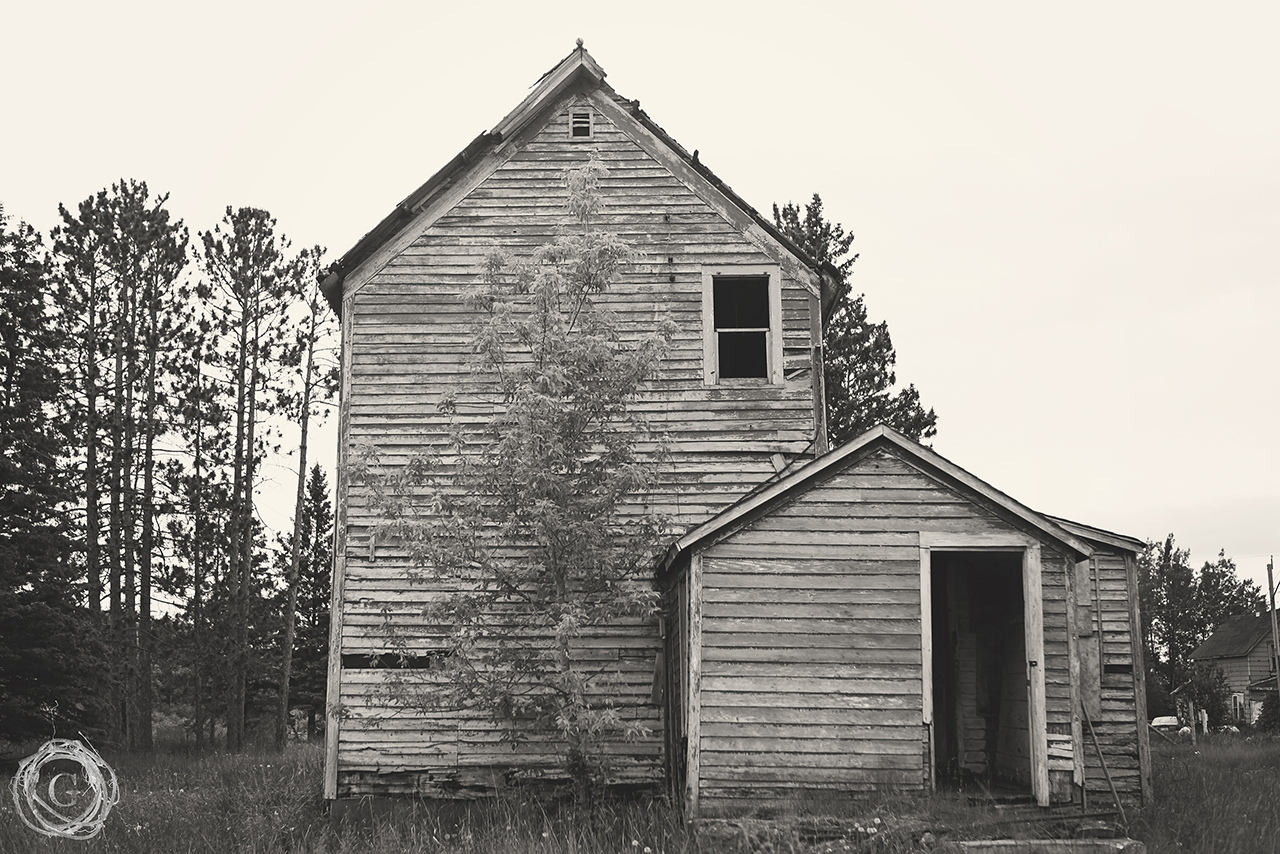 The farmhouse has always been at the frustrating intersection of being well built but not salvageable.  A good shape, sturdy, solid.  But a 4′ hole in the ceiling, 18″ of standing water in the basement, grazing sheep occasionally walking through and a general condition of neglect made even the most basic items unusable.  The rot, insect damage, poop, etc. destroyed things.  We scoured the place and pulled out everything we could use somewhere else.  We made trips to the dump and stripped shingles and pried off painted wood.  Most of the walls and siding were already free of paint thanks to weathering, and doors and trim, windows, mason jars and hooks were all stored away to sell or use later.

We really wanted to tear the house down in the winter, so it wasn’t muddy and we wouldn’t disturb any nests or dens.  We tried dismantling it piece by piece, but it was taking days to barely make a dent.  Rick told us he “had a guy” that had a two and a half ton army truck with a winch and enough power to pull the house down, and luckily he agreed to meet us up there.

With the basement frozen, John felt safe enough to go down and check out our own personal ice rink. 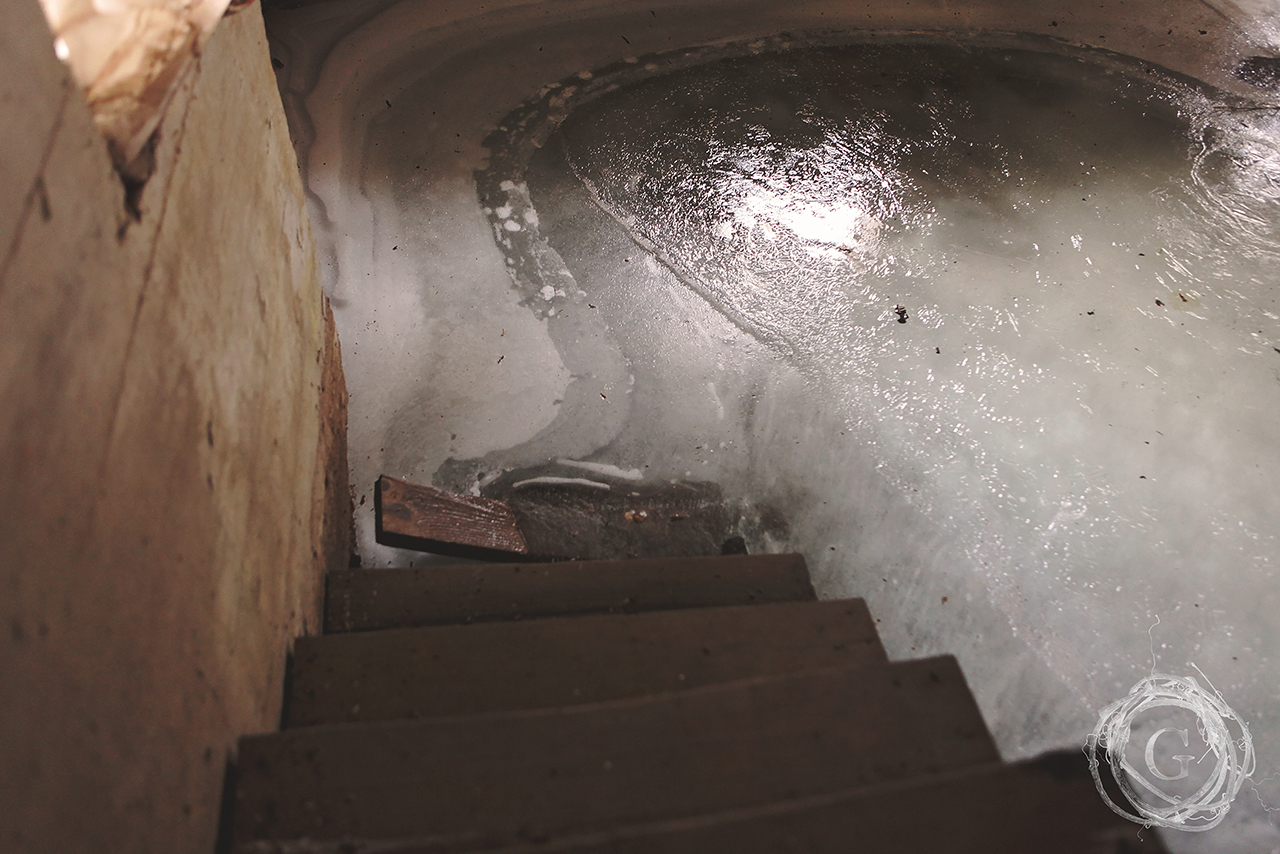 John caught a moment of me pondering…I do that a lot at the farm. 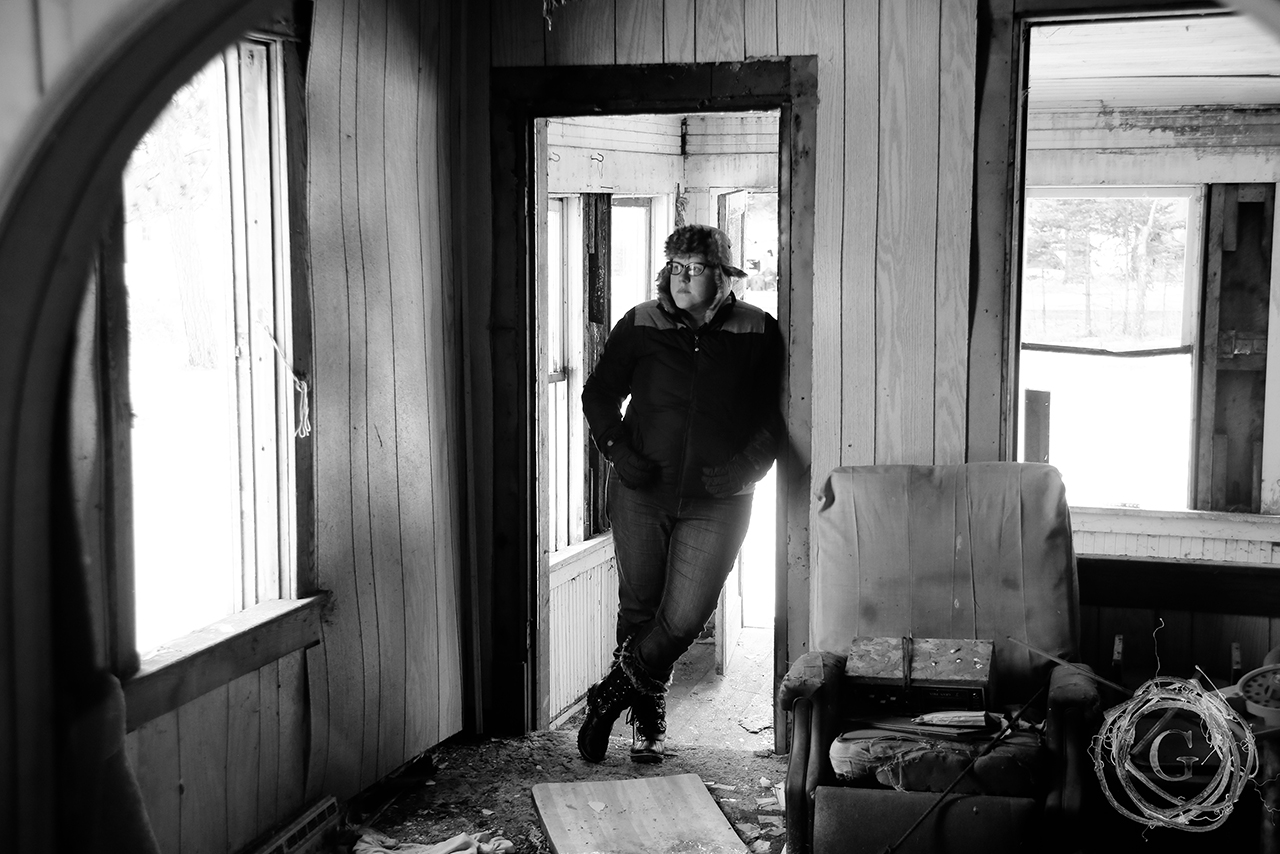 The truck worked for a good seven hours trying to pull the house down.  We got about halfway there.  The structural integrity of the building was just too good.  I thought it would fold like a pancake, but we resorted to taking just beam by beam apart and working by headlights as the guys kept insisting just one more pull would collapse the house. 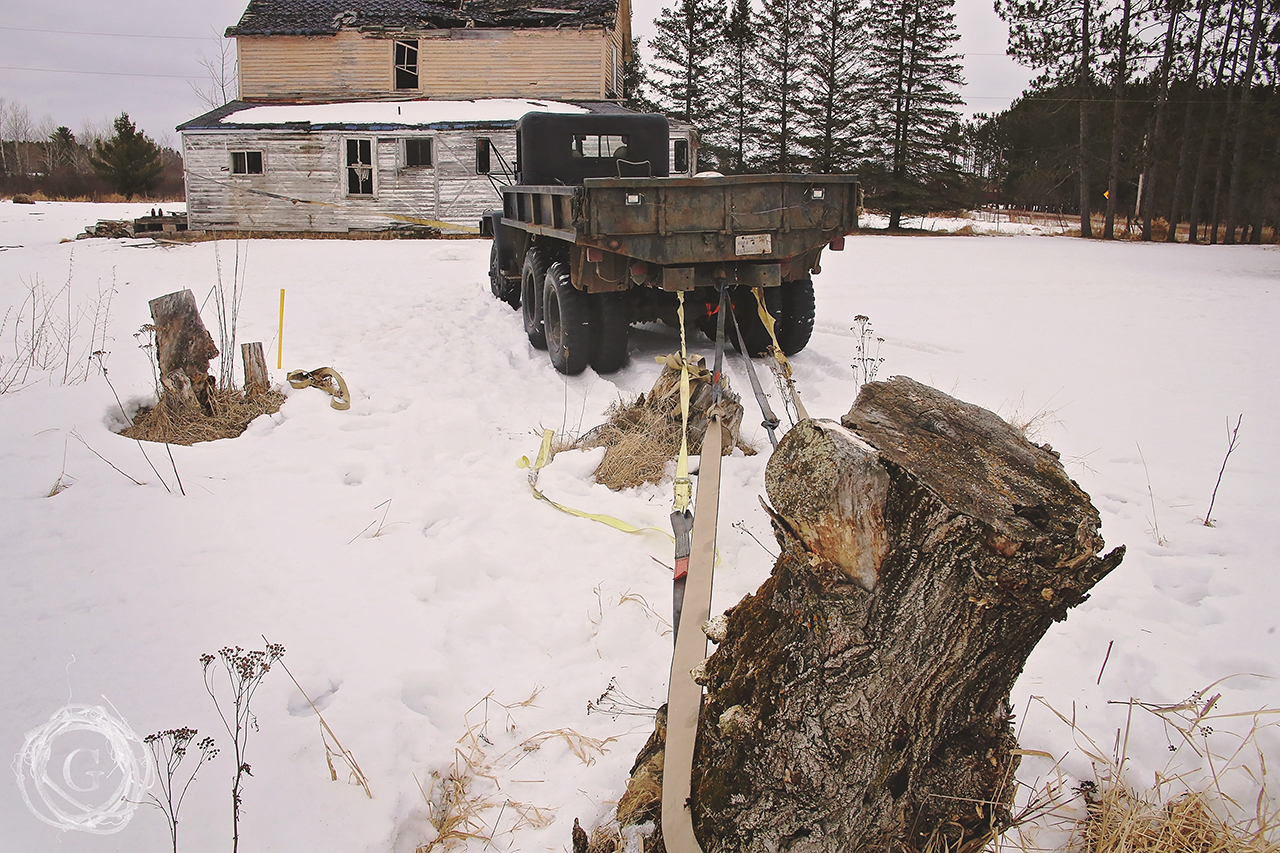 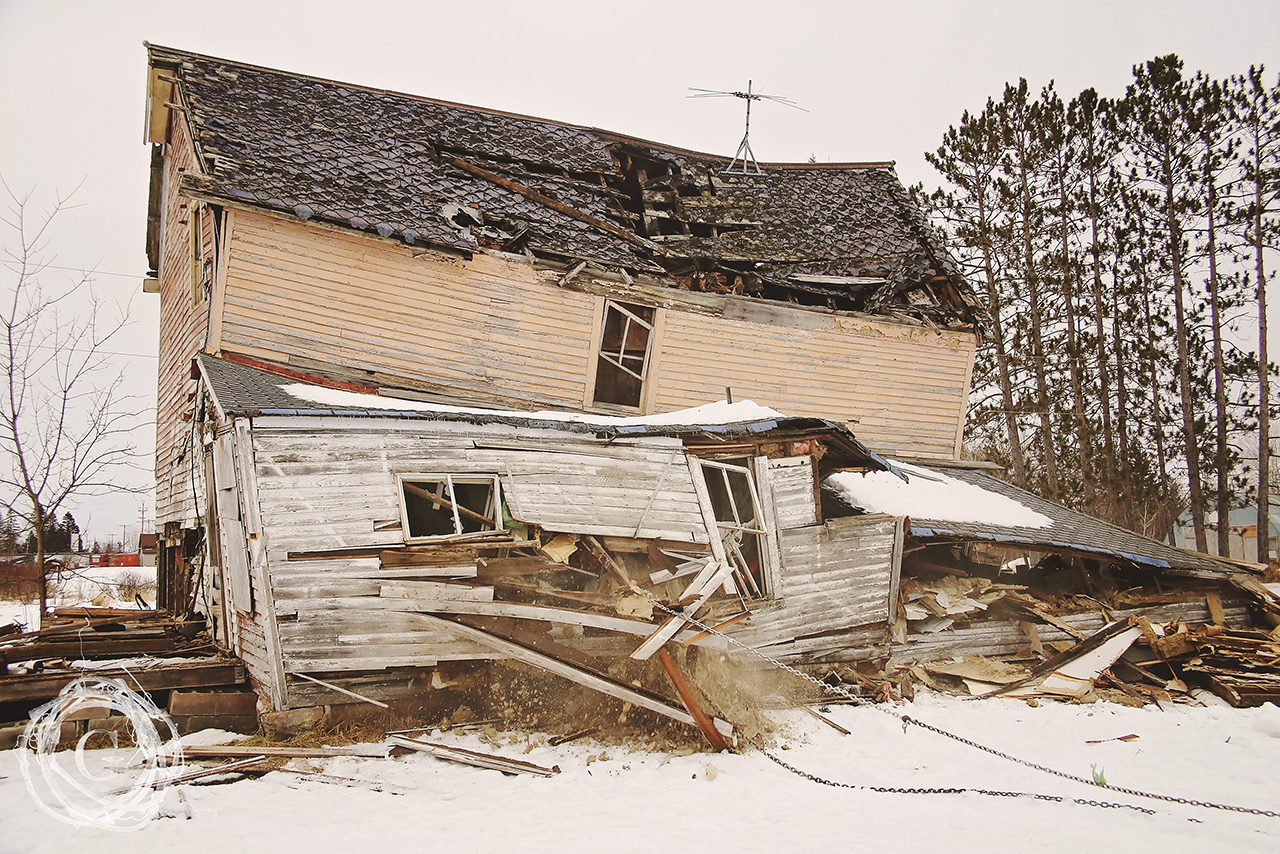 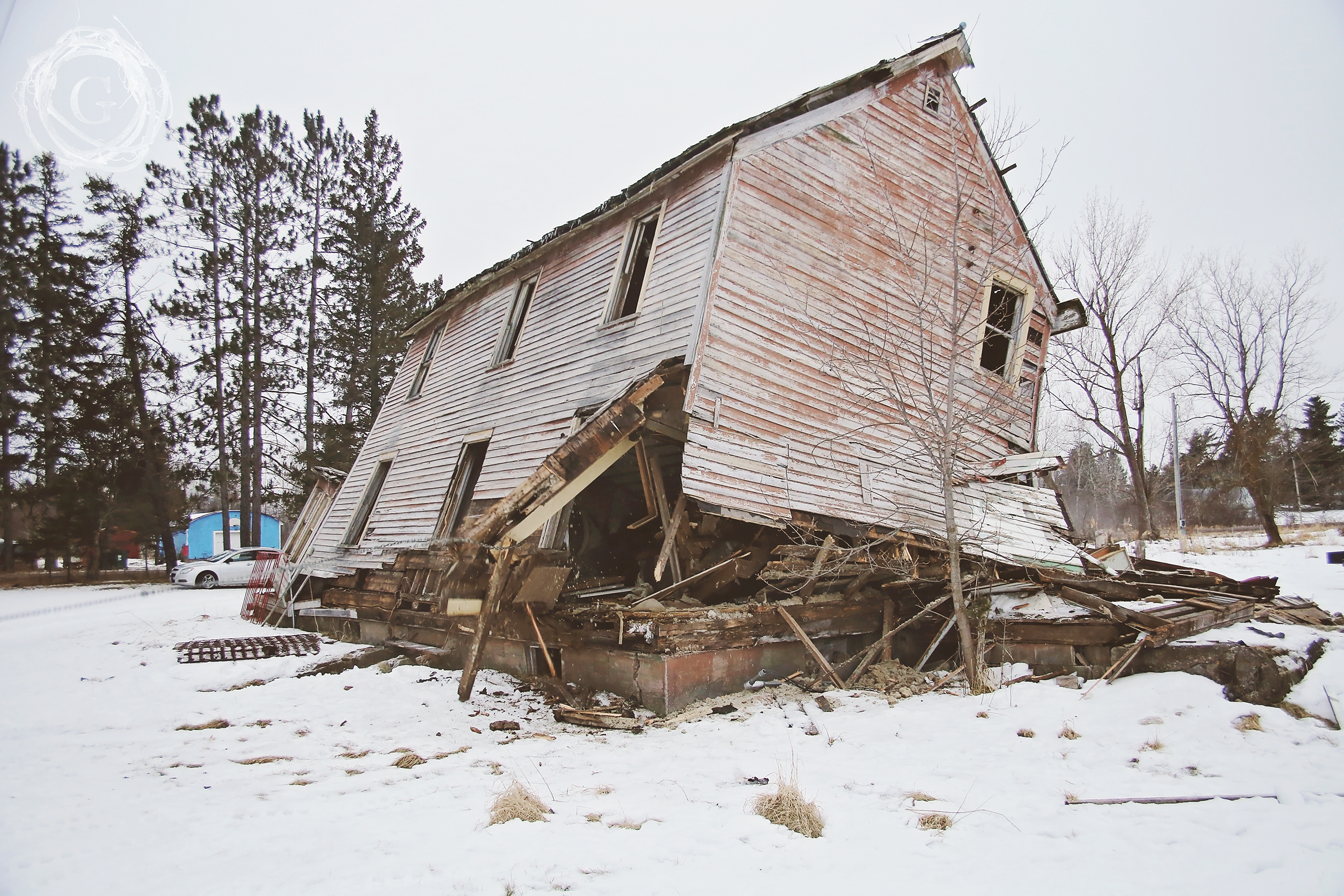 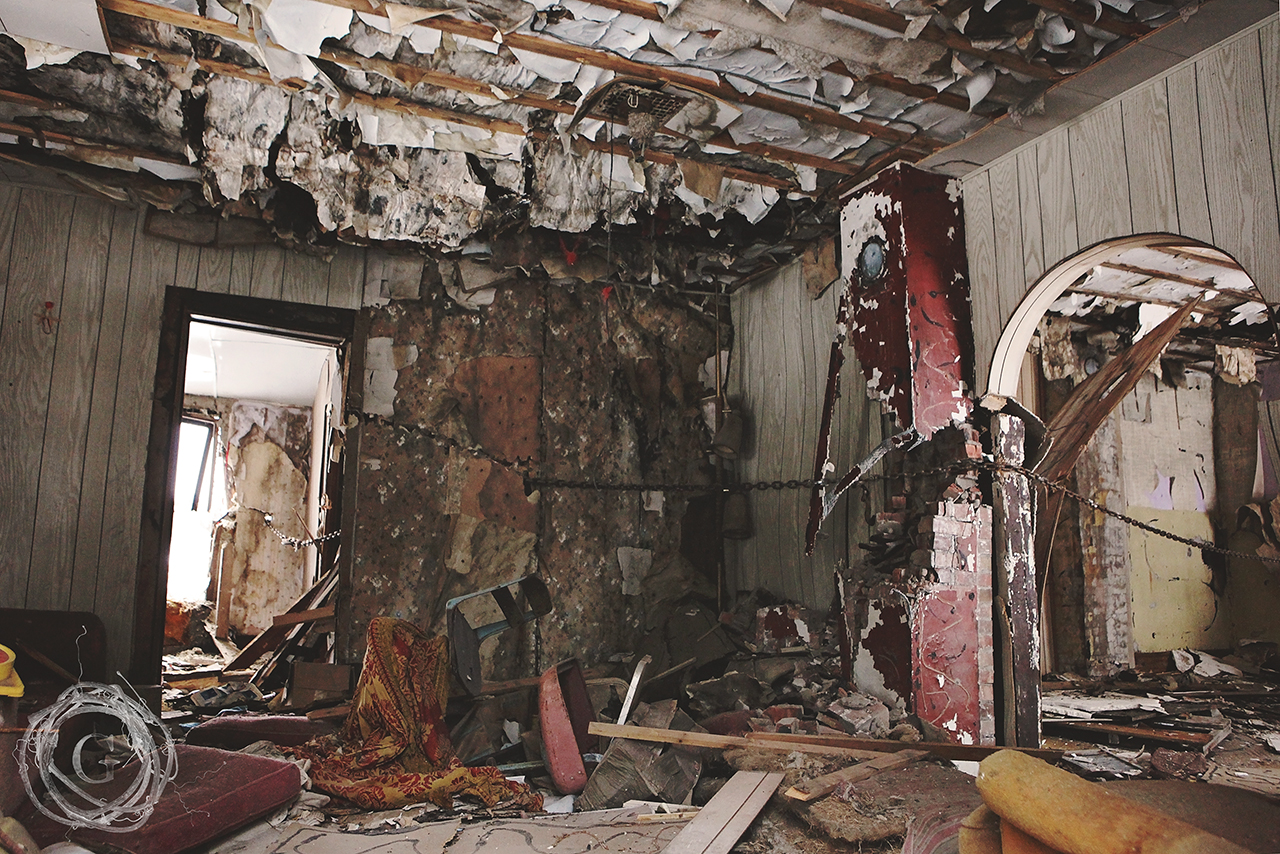 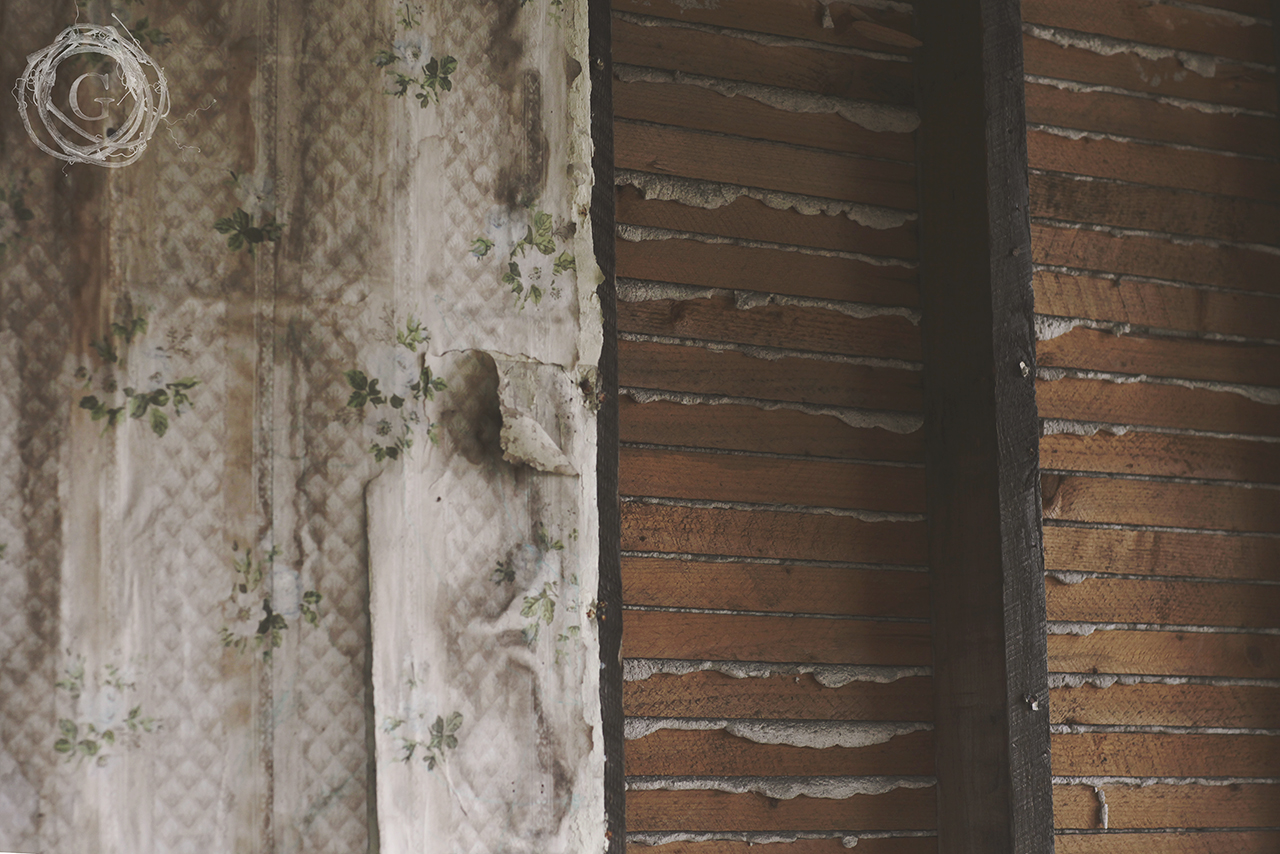 Anyone need a tv? 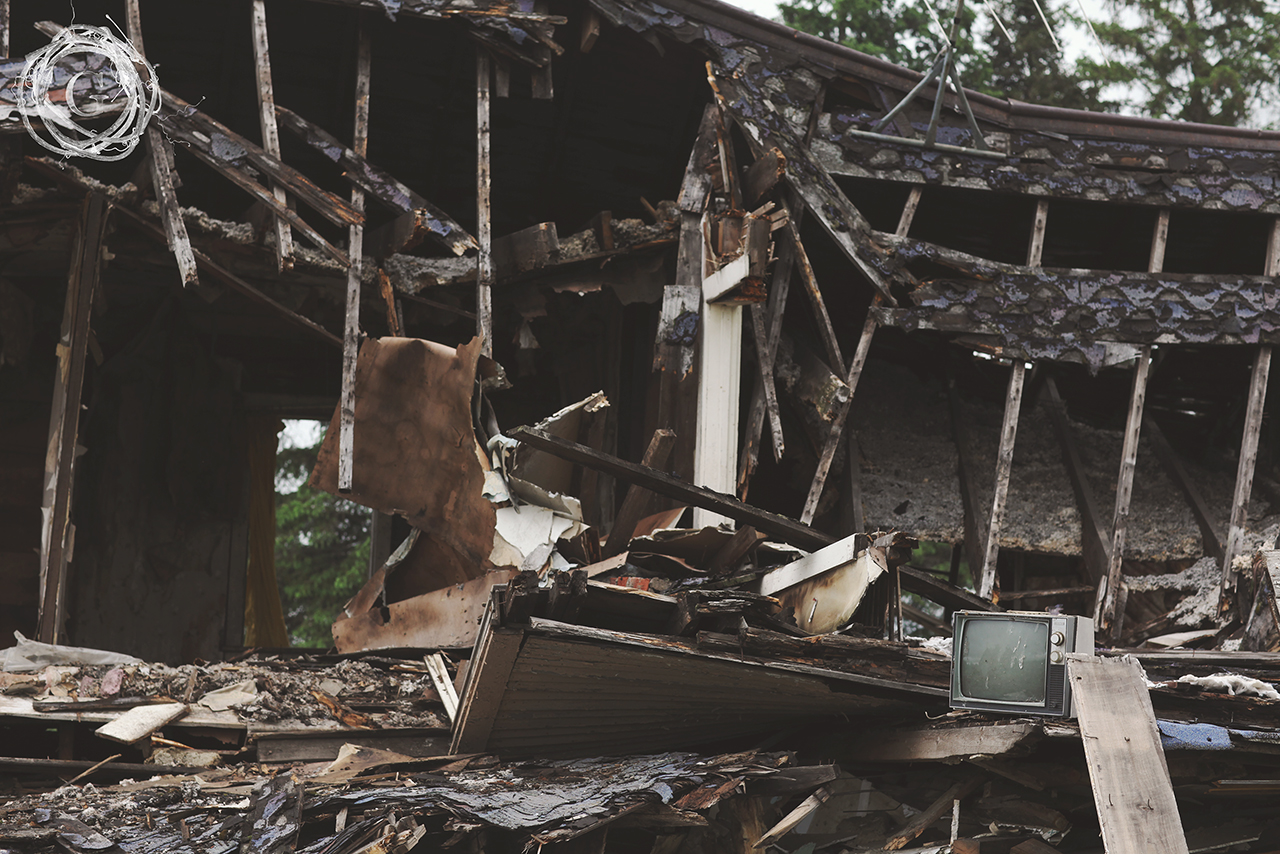 With the house now being a full on eyesore that made traffic slow down as locals tried to figure out what the citiots were up to, we knew we had to finish the job fast.  By the way, the house was still so sturdy, we could walk into any of these rooms, even in this condition.  John had busted up four of the main beams under the first story so it had sunk into the basement.  We continued to pick at it, piece by piece.  I told John his face was too scary when he demoed, so he put on a smile for me. 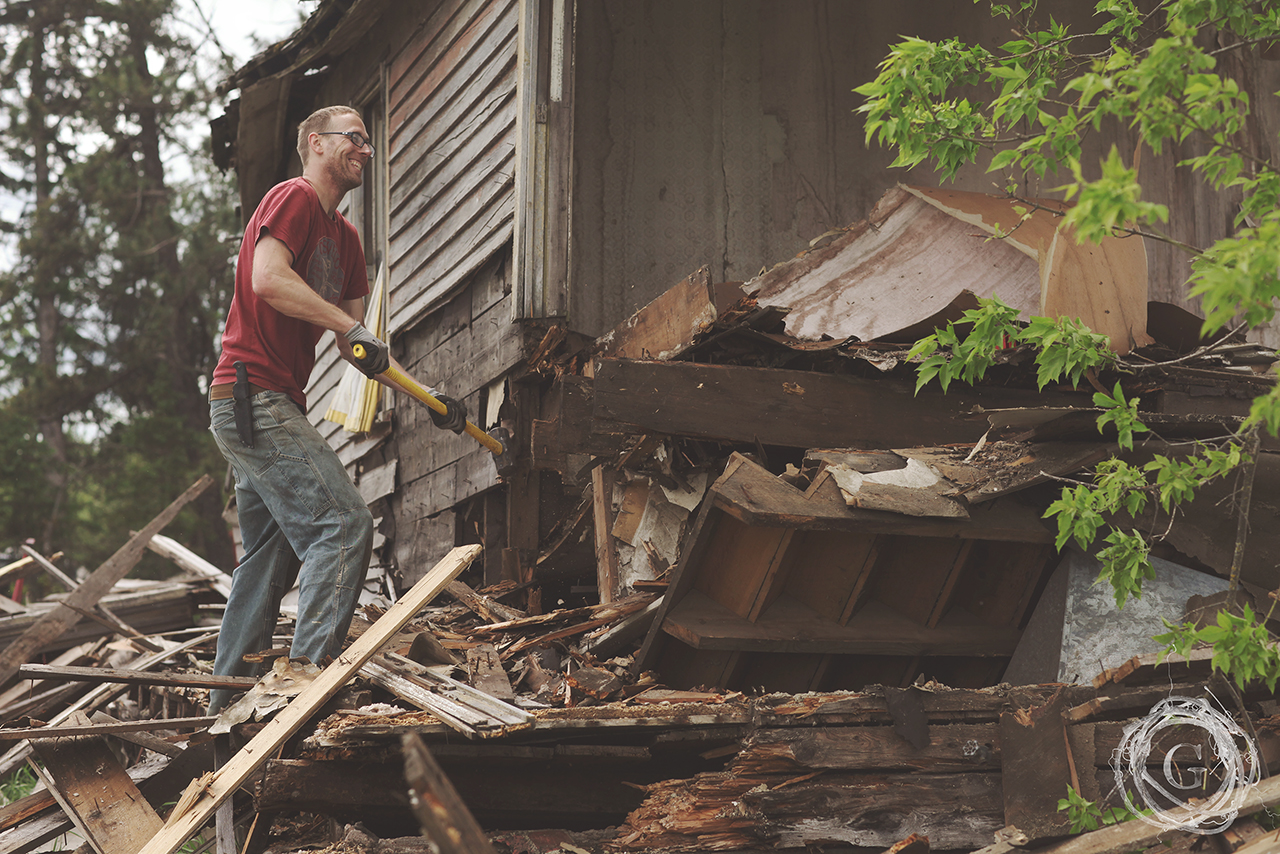 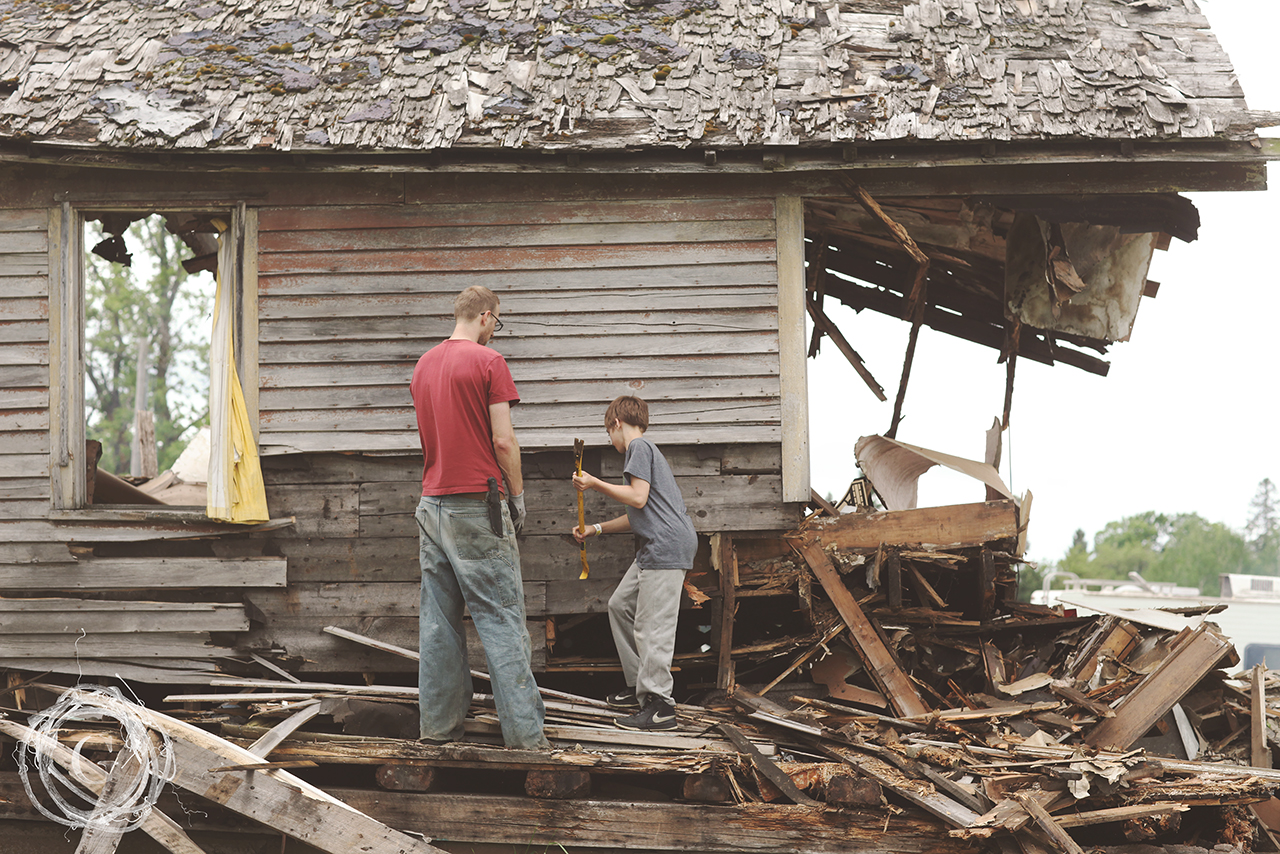 This is just some of the wood we salvaged! 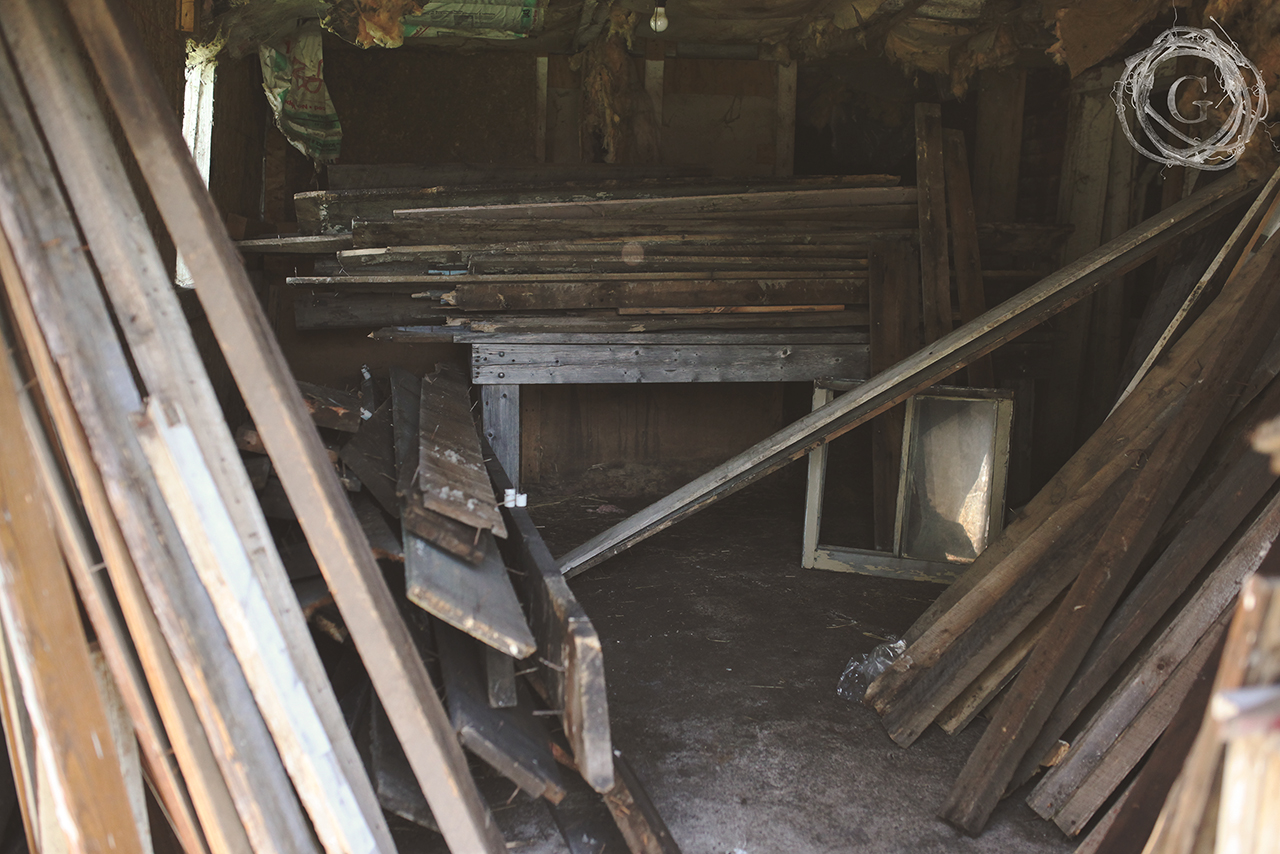 And this is just a fraction of the trash…if you know of any scrappers, tell them about us, we have all kinds of stuff for them! 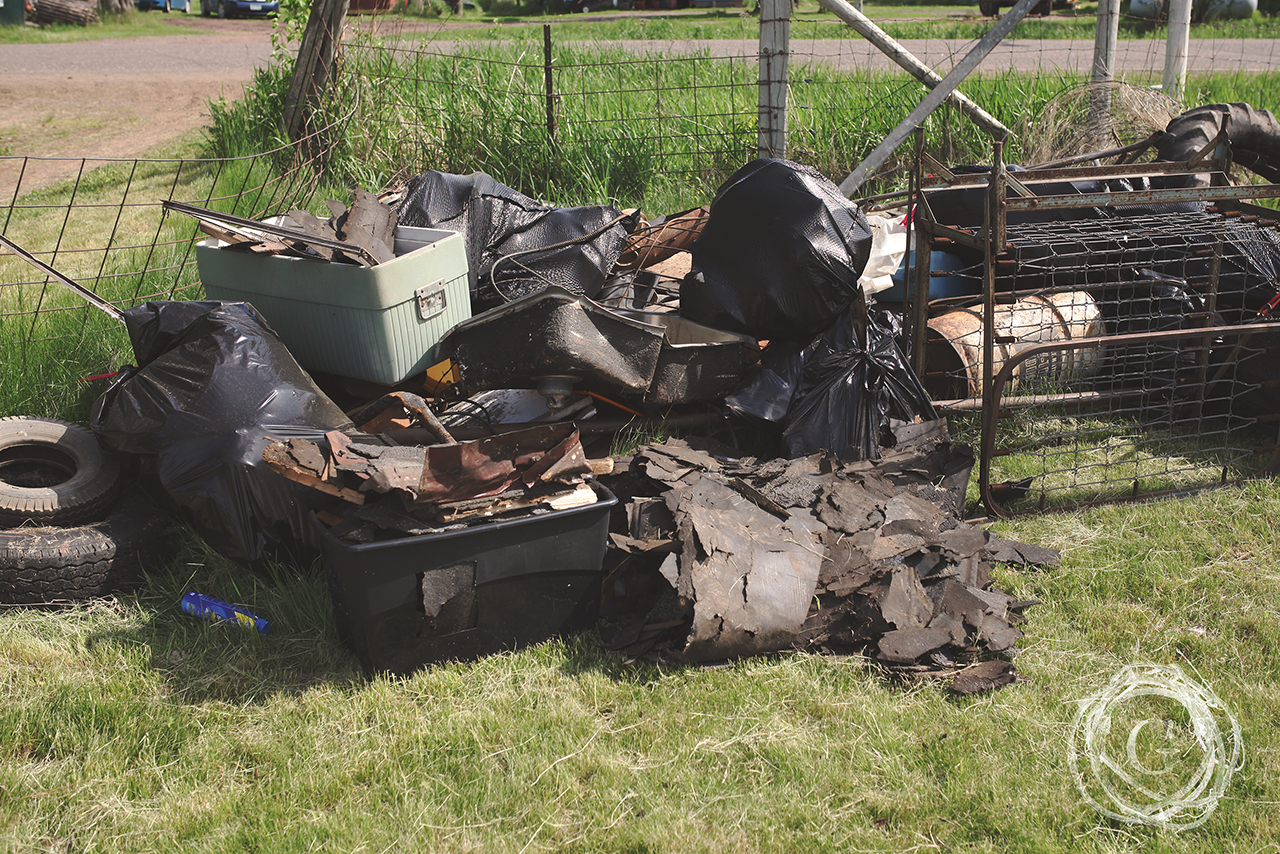 And then the goddess of good fortune threw us a frickin’ bone…another one of those “I’ve got a guy” guys agreed to work with us and had some spare time.  He drove his backhoe across town and decimated the rest of the house in just two hours.  He also pulled up some old stumps and leveled out a part of the field that had six huge holes in it that were a hazard.  He was amazing (and now John wants a backhoe). 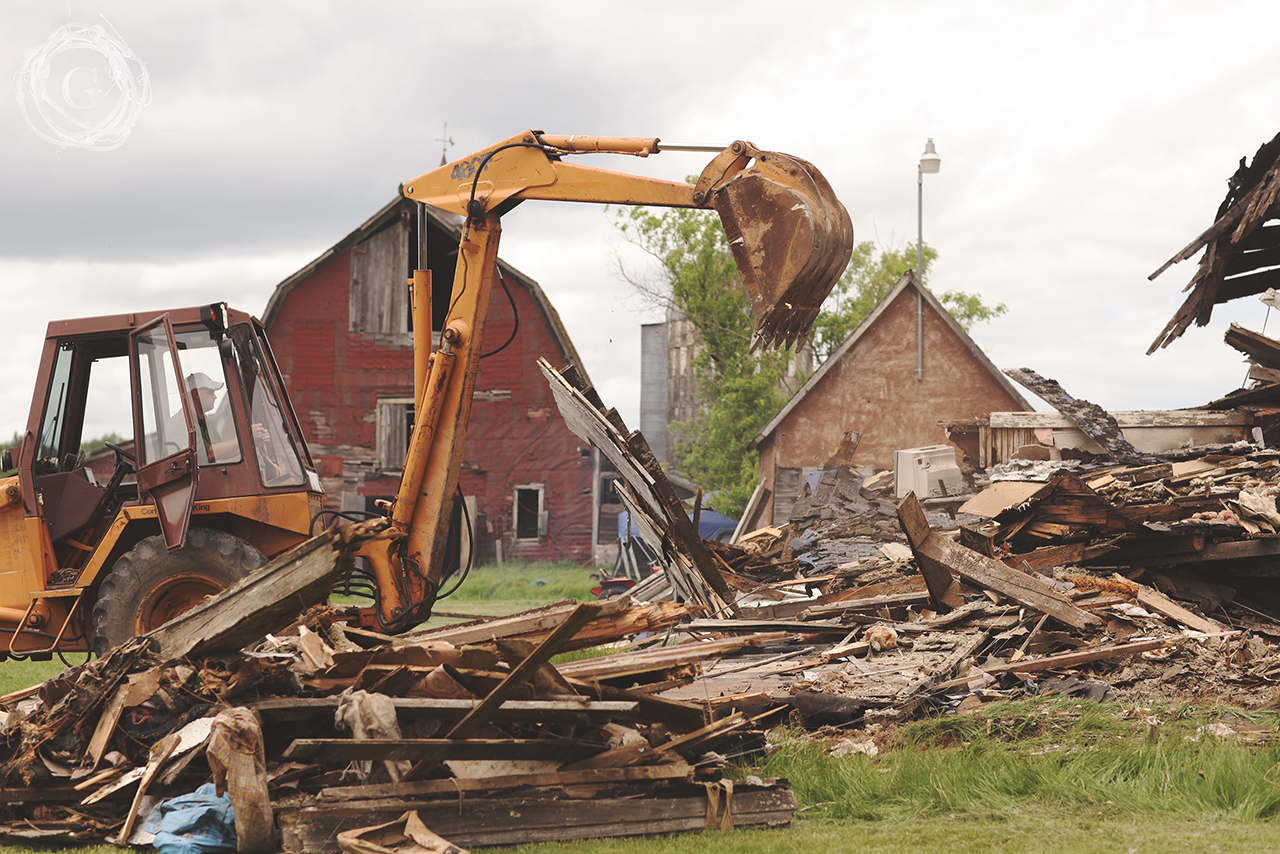 He separated the rubbish into 10′ piles so we could continue to pick through them and pull off shingles and other materials, I went to get a burn permit, and the good fortune kept coming with no wind that evening, and completely saturated ground.  We filled buckets with water, and started to burn the piles, one by one. 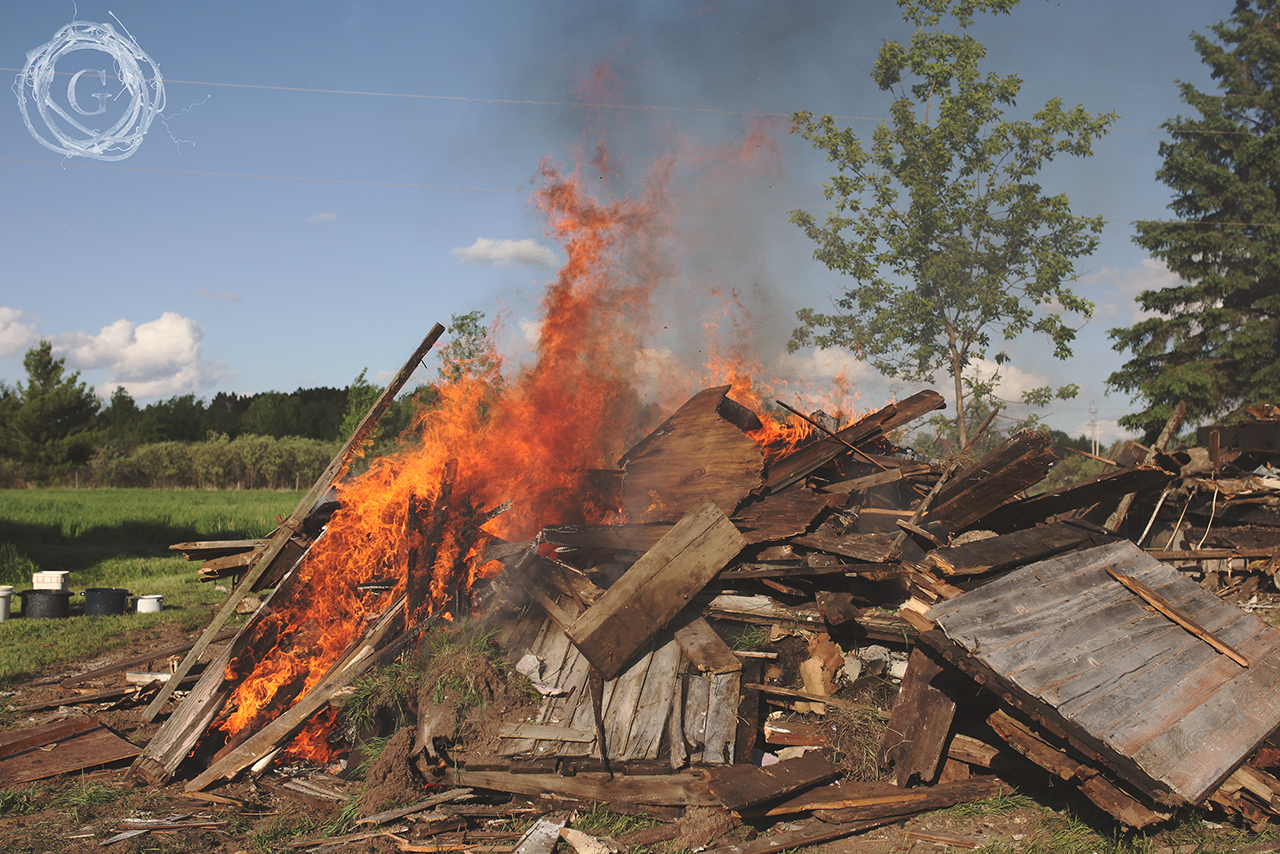 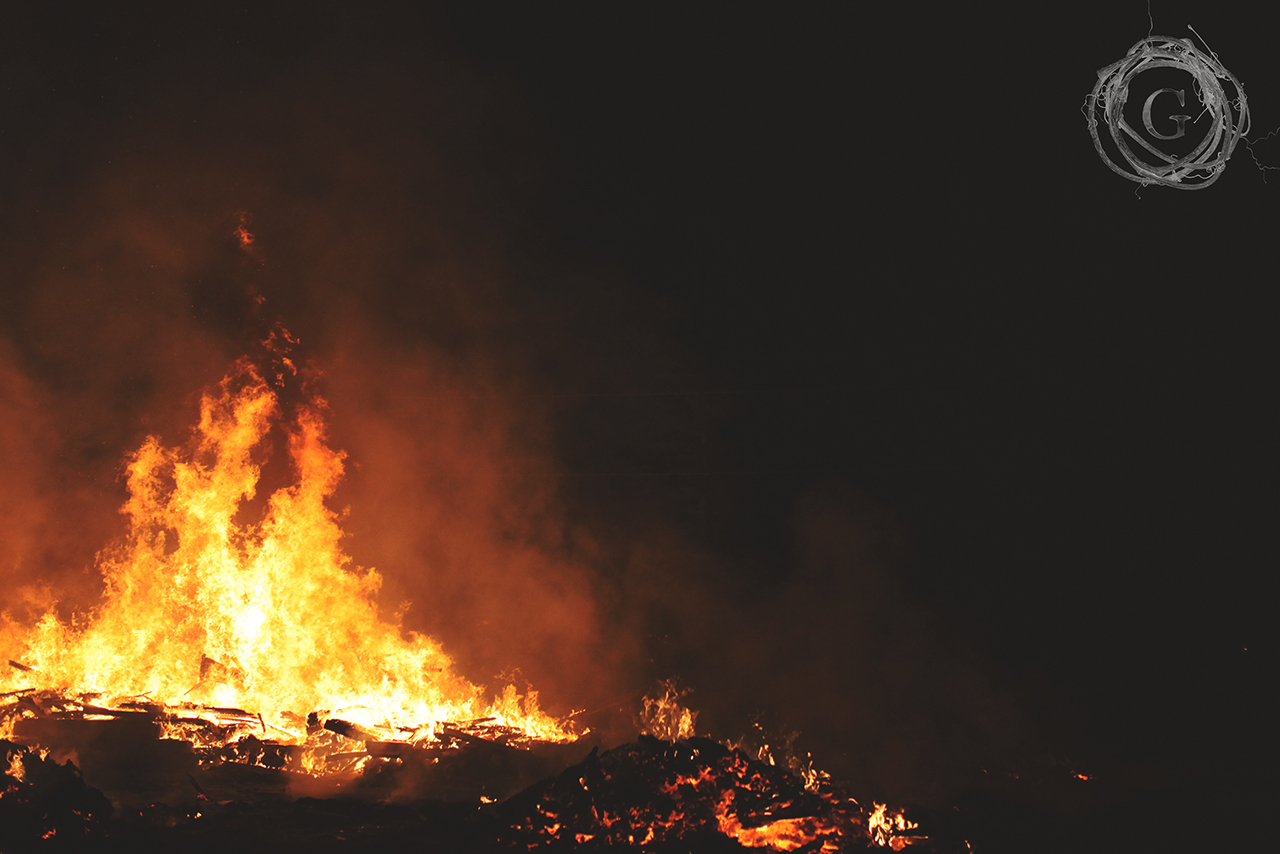 A couple neighbors came over and we had a regular party hanging out on the grass and chatting, making sure the pyres stayed under control.  We’ve never seen so much traffic on our street, word got out fast that there was a fire.  Unfortunately, one neighbor decided to call the fire department, so after six hours of safely burning, the entire Bruno volunteer fire department showed up, lights blaring.  We definitely are known in town now.  And since once they arrive at a fire they have to put it out (even with the owners saying, “no thanks, we’re fine”) we watched as they emptied four water truck loads of water over the next three hours.  They apparently couldn’t even leave things smouldering.  At least we got some cool pictures. 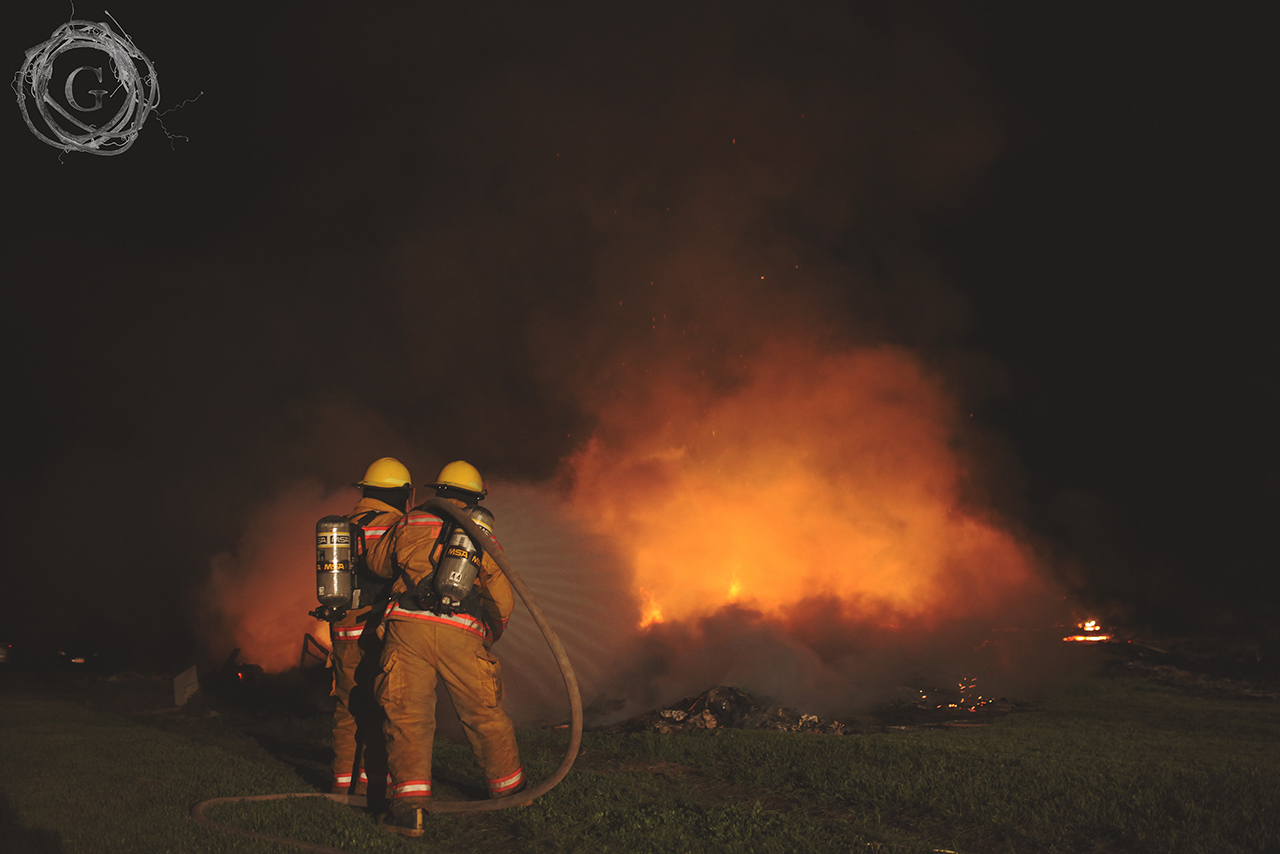 The next day, all of the soggy coals were scraped to the foundation.  We’ll figure out how to get rid of the rest of the rubble another day.  Eventually, the space will become the main campground for the property.  Nice and flat and on high ground.  Add a couple of sugar maples for shade and it will be downright peaceful! 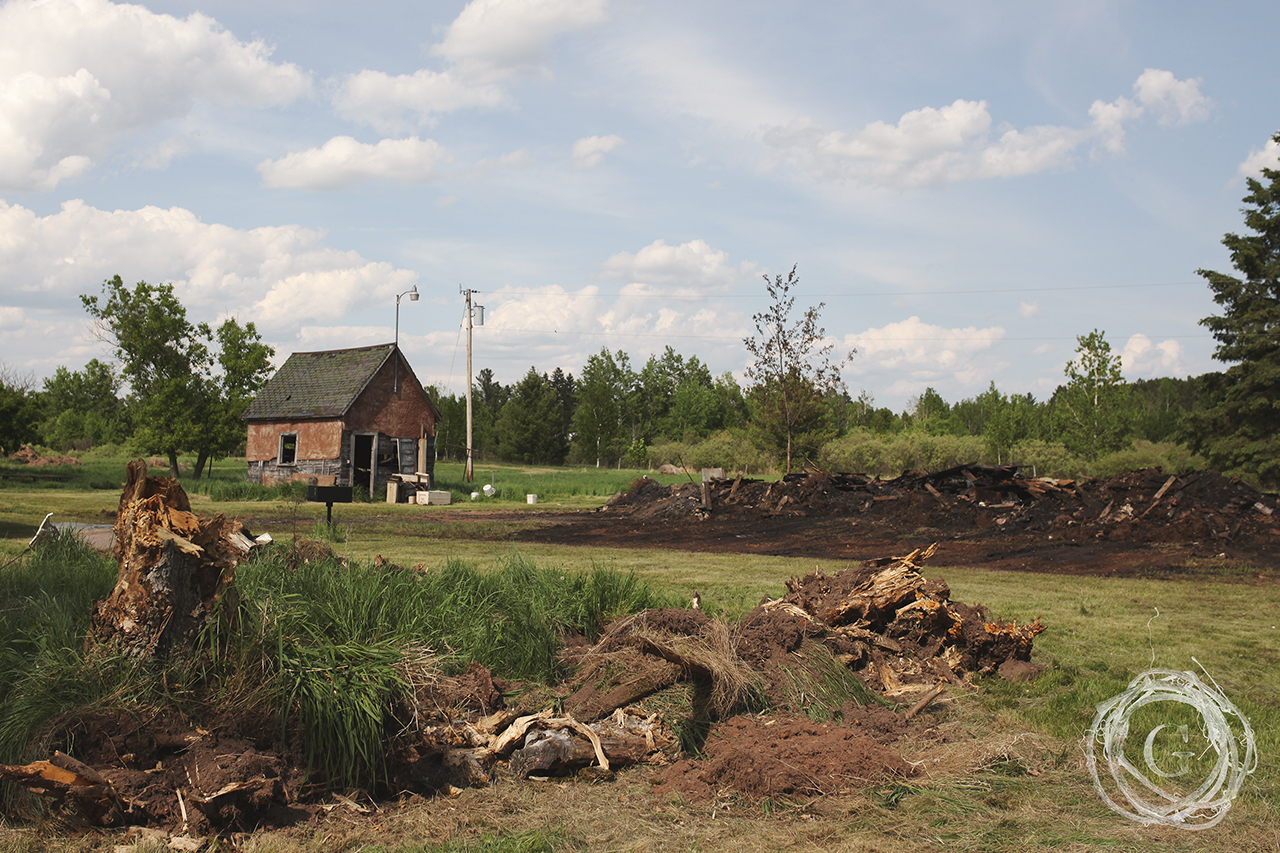 So that was our Memorial Day weekend in a nutshell!  We will get charged for the fire department visit, but considering we started the weekend trying to tear the house down with our bare hands, we are really pleased with how things turned out.  And hopefully now, the citizens of Bruno will know we are actively trying to take this abandoned blight on the town and turn it into something amazing.

If you ever want to come and explore, we plan on being up there a lot this summer!  We will be announcing when we will be building or doing specific projects so if you have an interest in learning or participating, you can join us!